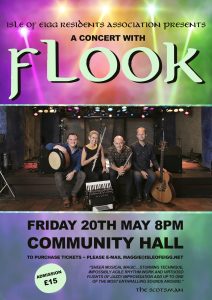 Tour de force return after decade and a half – a luminous reunion ****’ – The Irish Times‘Flook’s role and influence in the exploding excellence of instrumental folk music of various persuasions on these islands shouldn’t be underestimated… as vital as ever … Class is indeed permanent’ – fRoots‘Nothing short of transcendent… No other band sound like Flook and the new material has pushed them to new, exhilarating heights.’ – Songlines: Due to overwhelming popular demand, Flook are back on the scene. After a recording hiatus of 14 years, Flook released ‘Ancora’ in April 2019.With the flutes and whistles of Brian Finnegan and Sarah Allen, the guitar of Ed Boyd and the bodhran of John Joe Kelly, this iconic band weaves and spins traditionally rooted tunes into an enthralling sound – with agile but tight rhythms and virtuoso improvisation. Flook possesses a rare blend of fiery technical brilliance, delicate ensemble interaction and a bold, adventurous musical imagination.There is no shortage of virtuosity amongst the members of Flook, but the unique impact of this sensational Anglo-Irish group stems from the wholly intuitive, almost symbiotic, exchange between the various flutes, frets and skins. ‘Ancora’ marks a return after too long away, but also a continuation.