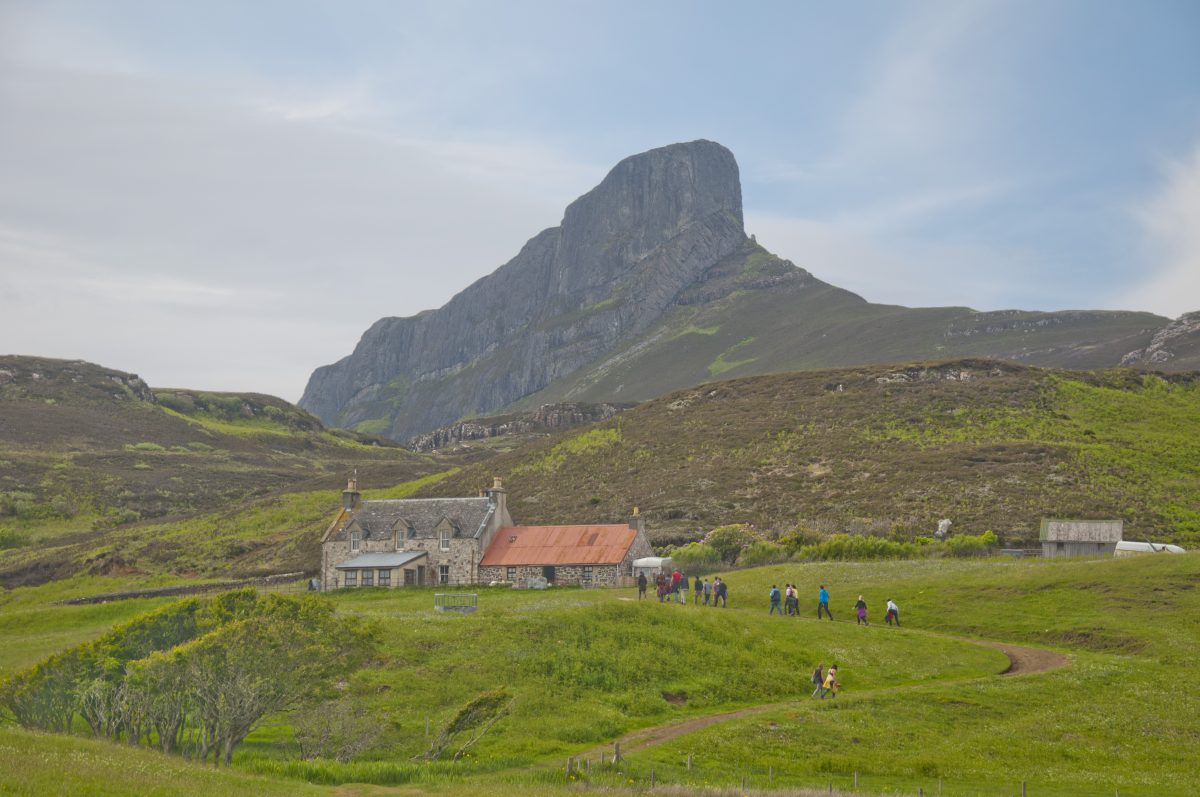 Exploring Eigg’s geology is to take a journey through eons of time when the west coast of Scotland was situated at the edge of an ancient ocean, 1000 million years ago and was then overlaid with lava flows when volcanic complexes erupted as continental drift split Scotland from North America with the opening of the North Atlantic.

8,000 years of human occupation have left their mark all over the island: ancient forts, burial mounds, Early Christian crosses, shielings and Clearance ruins, an 18th century water mill and historic farm houses.   From the grim tale of the Massacre Cave to the success of the community buy-out, stones, bones and stories are everywhere.

Eigg is part of the Lochaber Geopark and is a place where geology and landform are constant sources of amazement. With the oldest rock at sea level and the youngest, the Sgurr pichstone, forming the highest ground, the rocks of which the island is formed and their relationship to those of the surrounding areas tell us much about Scotland’s geological history.  Hugh Miller, the pioneering Scottish geologist, made an important contribution to that history with his discovery of plesiosaur remains on Eigg during his visits to the island in 1844 and 1846.

Even within a short time, excursions to see the geology of Eigg are extremely rewarding. The two essential walks are Laig bay, the Singing Sands and the North end or the Caves and the Sgurr

Jurassic Park at the north end

In Jurassic times, 168 millions years ago, Eigg was a shallow lagoon cut off from the open sea where ammonites thrived and plesiosaur swam around! A great influx of sand formed deltas into this lagoon. This is now the North coast between Laig and Kildonnan, famous for its Hugh Miller reptile beds and the Singing Sands beach. On that beach the pure quartz sand grains emit a shrill squeak when they are crushed underfoot in dry weather.

Hawaii in the Hebrides

61 millions years later, during the opening of the Atlantic, repeated eruption of fluid basaltic lavas (like those erupting on Hawaii today) built up layers several hundred metres thick. Accompanying stresses and stretches produced the dense swarms of dykes so particularly well displayed between Laig Bay and the Singing Sands. Weathering and erosion of the basalt layers then produced Eigg’s terraced landscape.

58 millions years ago, a major volcanic eruption occurred on neighbouring Skye. A pyroclastic flow – a hot suspension of rock particles and gases – swamped the landscape, reaching the winding bed of a river system carved in the Eigg basaltic plateau. Filling it to the brim, the suspension collapsed and cooled, becoming the pitchstone that now forms the Sgurr. Further cooling produced columnar joints at right angles to the valley sides near the pitchstone’s base and amazing fan like patterns are seen on the summit ridge.

Volcanic rocks formed from pyroclastic flows are called ignimbrites, contrasting with lavas, such as the basalts on Eigg, that cooled from liquid magmas.

Much later the pitchstone, harder than basalt withstood erosion far better than the surrounding rock. With glaciation providing the finishing touches, the mile long ridge of An Sgurr now stands proud as the inverse of an ancient valley, as impressive as Antrim’s Giant’s Causeway.

One million years ago, Scotland experienced a succession of ice ages. It is the waning stages of the last one, 26 thousands years ago, which has shaped the present outline of the island.

Coarse glacial debris transported by the ice created the moraine landscape of the crofting area with its flowing parallel ridges. Between these, boulder clay has provided a rich soil for tillage. Brought over by the ice, erratic pebbles and boulders from the mainland, mostly gneiss and pegmatite, are dotted around the island.

When the ice finally melted, storm-beaches formed. But as the land rebounded faster than the rate of sea level rise, they are now found at heights of 5 metres above sea-level behind Laig Bay or near Eilean Thuilm at the North end.

Today the landscape of Eigg continues to change, and the basalt cliffs at the north end are retreating. Mudslides happen regularly there, following on the spectacular landslides which formed after the last de-glaciation and are another of Eigg’s striking landforms.

In the autumn of 2016, Skills for the Future trainees based with Historic Environment Scotland spent time with the community on Eigg exploring the island’s Archaeology together.   The trainees created a website called Interpreting the Archeology on the Isle of Eigg, a fantastic resource you can explore by clicking here.

Evidence of settlement goes back to the Mesolithic Period and finds of axe heads dating to the New Stone Age have also been recorded. Graves marked by cairns span the long period between the Neolithic and the Bronze Age. Hill forts date back to the Iron Age.

In the seventh century, Donnan evangelised the island after travelling throughout North West Pictland. After his death in 617, the monastery he founded came under Iona’s rule and flourished. Several Early Christian crosses recovered from this site attest of its importance at the time

Viking invaders raided the island then settled there from the 8th century. A magnificent Scandinavian sword-handle and parts of a longship recovered on Eigg are now part of the New Museum of Scotland’s collection. The hybrid Norse-Gaelic culture which developed in the Hebrides culminated in the flourishing of Lordship of the Isles in medieval times. A beautiful cross-shaft dating back to that period is erected in the Kildonnan graveyard.

The ruined chapel at Kildonnan also dates back from this time. It also features a 16th century burial aisle displaying the heraldic shield of the Clanranald chiefs, a powerful branch of Clan Donald, in whose ownership Eigg remained for 400 years.

Runrigs and earthen dykes are the remains of the division of the island into 8 farms in clan time. The township ruins and field enclosure in Grulin offer a good example of what an 18th century farm would have looked like. Many of the island’s historic farmhouses date back to the time when the clan aristocracy grew prosperous through the harvest of kelp in the 18th century. The mill at Kildonnan also dates back to the Age of Improvement.
The Cleadale crofting landscape shows the division in narrow strips which marked the changes brought about in the 19th century, when land was given over to sheep during the Clearances.

From the late 19th century, the use of the island for sporting purposes also left its mark with the erection of successive lodges, of which one has survived, the B listed Italianate Lodge built by the Runciman family in the 1930’s in the shelter of mixed woodland planted to encourage pheasant and other game.

Completing the wide span of buildings with historic interest on he island, are also the old parochial school, still used as the island primary school, and the island churches, the 1862 Small Isles parish church in Simple Gothic style, and the 1910 Art and Crafts Catholic chapel of St Donnan.